I realised that at the end of term – ie when I can become a full time artist this blog doesnt exist (no July and August) so I am starting to collect reading material and plan for July and August’s reading and making. With only 4 more teaching days this year I can see the light at the end of the tunnel. I will also try to negotiate some public space in which to make work at the beginning of the year, in addition to reading and experimenting. This month has been lost to catchup at teaching job so far but I am beginning to feel the mental space to reflect on which way I am going. One of the first things that I realised was that although I want to continue drawing and do some printmaking in paper, I am not drawn to continue painting on canvas for now. This is a big shift for me as I have been making ‘paintings’ on canvas or board: objects. As I travel around, especially on the local trains I see potential sites everywhere so I think I will start July in this way with a balance of academic reading/ material investigation and local research.

I am collecting a variety of papers and articles to read and websites such as this one which I find potentially very exciting.

And now I am ordering the books from the reading list.

As I am completing my reflection of the Exploratory Project I have identified my interest in work. In my tutorial with Stewart Geddes he had an issue with my use of the workers as a way of describing my subjects. He said it sounded very dated. I find this really interesting. It might be partially related to the language issue, I still read ‘trabajadores’ in Spanish news, or do I? What then or who are the workers now? With huge unemployment there is a lower percentage of the population in employment but how are we employed? I have realised that these issues matter a lot to me. Having completed the essay and sent off and uploaded my work for assessment I feel I have the opportunity to research new areas. I was not able to put all the issues I wanted to research in 2000 words. Various subjects I wanted to include and which I want to relate to my work had to be edited out. I also realise that I started so late that I don’t think I had a good approach the essay was just me surveying some theories and practices which relate to mine in a relatively superficial way without much of a critical edge. At the time I just wanted to meet the deadline and keep up with my other work. 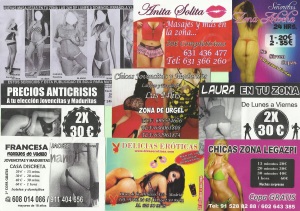 It is clear that my work in Ciempozuelos not only relates to social changes in communities but also fundamentally to the work place and labour itself. Over the past few months the change in the way prostitution is ‘sold’ has become more and more visible in my daily life. Every day these small flyers (usually about 6-8cm) are left on car windscreens. I first noticed these walking around in Southern Madrid neighbourhoods but gradually they got to more central areas. In some ways it is shocking and saddens me on the other hand maybe this ‘industry’ should not be hidden from us. I was shocked by the prices ‘anti crisis’ how little they were asking and the supermarket style special offers. This makes me question not only how women are used in the sex industry but also how this is part of a huge change in the way work is defined and our relation to it. I am not sure what I will do with the flyers for now I am collecting and I am reading about how we define work.